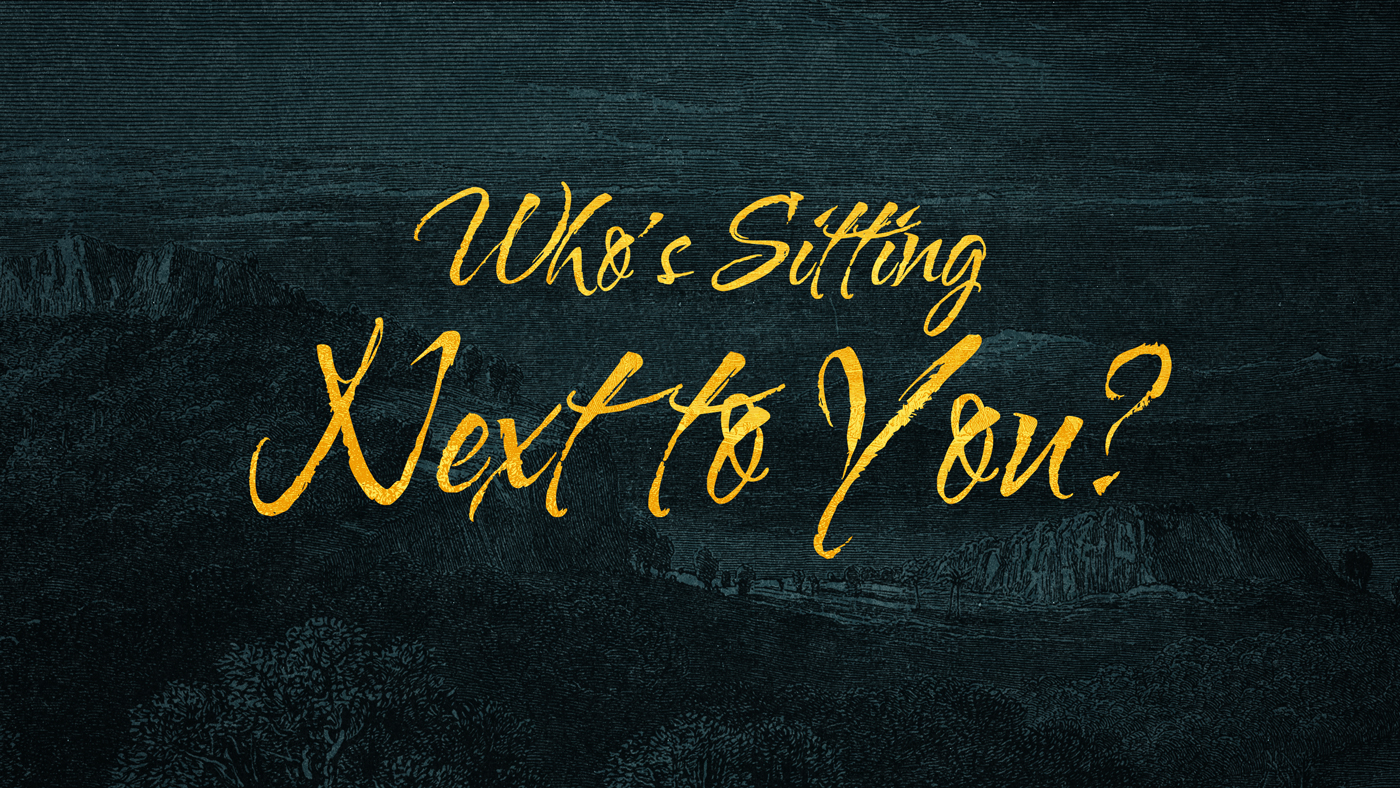 On a recent trip, I was flying solo on a Southwest Airlines flight. As the hassle of the “cattle call” started, I lined up at my number – C38 – to enter the plane and find whatever seat was still available that had the most legroom. Being tenth from the last to board, I wasn’t very hopeful about my prospects. Fortunately, when traveling alone sometimes there are some acceptable options still left open such as the front row, middle seat. Sure enough that’s what was there for me so I slid in between an elderly gentleman who was already “jamming” to his earbud-induced music and a friendly-looking, smiling grandma.

After saying hello but with lots to do, I got comfortable in my seat (as comfortable as you can get on a flight) and pulled out the work I had to pass the time. I put my earphones in and began to enjoy some music. After an hour or so, I needed to get up to stretch. Upon returning to my seat, the grandma asked me what the two bracelets I was wearing meant. I proceeded to tell her that the black HE>i bracelet was symbolic for “He is greater than I” and refers to John 3:30 when John the Baptist tells his disciples that he must decrease and that Jesus must increase.  It serves as a reminder to me to lower myself and raise Jesus up. The red bracelet is what we use with our confirmation students to teach them the story of the Bible. It shows ten different icons – five from the Old Testament and five from the New Testament. The tree represents He Created the world, the snake reminds us that We Fell into sin, the Jewish star signifies that God Promised to save us through His people, the shepherd’s staff is for God Delivering His people through Moses, and the crown is to herald the promised Savior’s Coming in the future. On the back side of the bracelet, Jesus life is laid out through the New Testament – He Came, He Died, He Rose, He Ascended, and He is Coming Back. 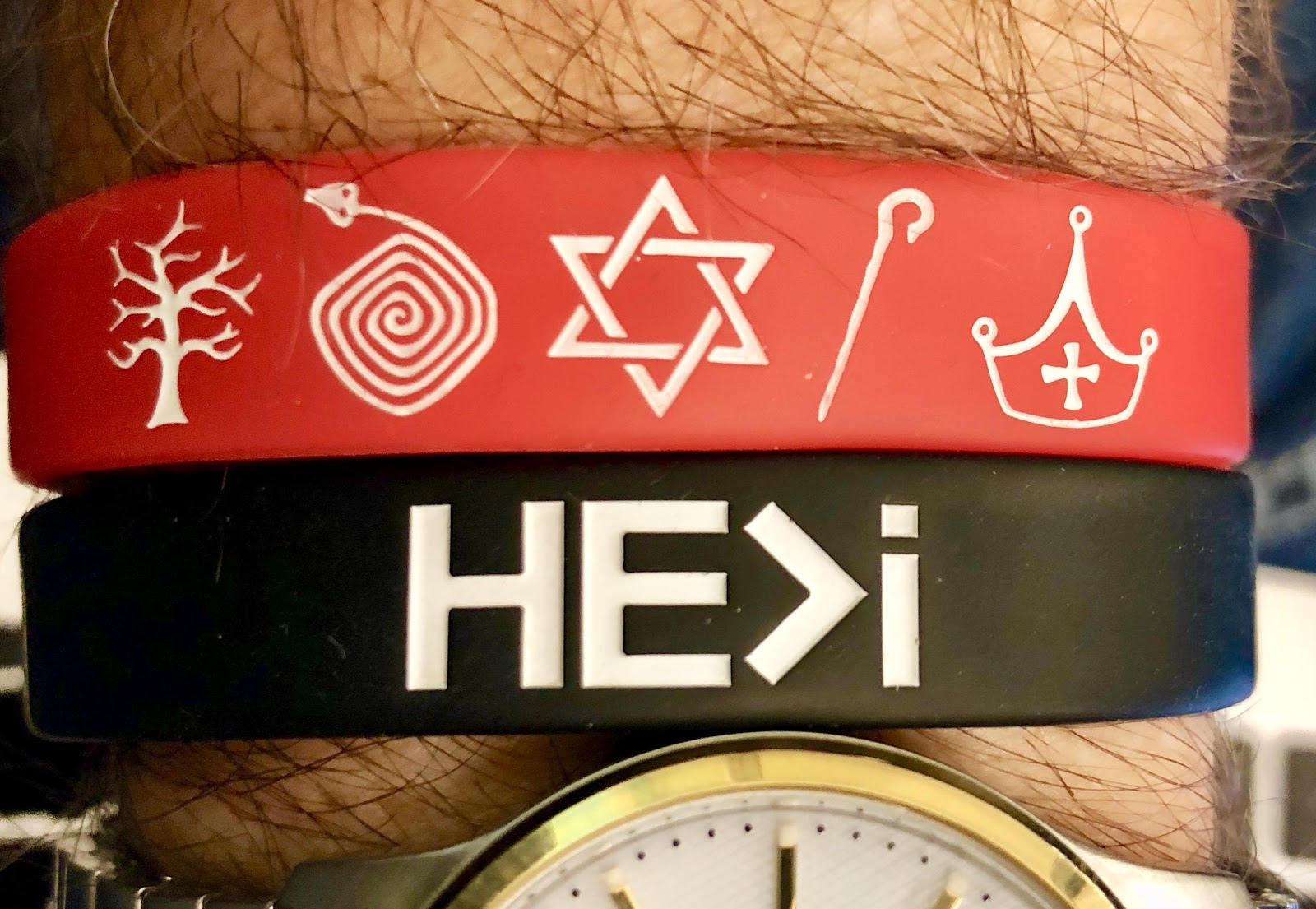 After sharing all of this, I was expecting a reaction from her along the lines of, “Oh, uh-huh, that’s nice but this is awkward so let’s move onto something else.” Instead, she said, “That is so neat! Are you a Christian? So am I! I ran a Christian bookstore in Phoenix for many years.”

For the next two and a half hours of our flight, I learned a lot about my new friend, Gloria. She has two middle-aged daughters – one who is a believer and one who is not. Gloria has six grandkids and several great grandkids who are all Jesus followers. Her husband died in a car accident many years ago when her girls were ages 6 and 8 so she raised them on her own and tried her best to teach them to love Jesus. Apparently, Gloria’s husband was a passenger with their brother-in-law who was driving and not feeling well so her husband graciously offered to drive. After switching places, their car was t-boned on the driver’s side resulting in her husband’s death but her brother-in-law surviving the accident. Her oldest daughter took the loss of her father a lot harder than her younger daughter at the time. Today, her younger daughter has a solid faith in Jesus but her older child is still angry at God for taking her dad so young. Gloria had just found out from her cardiologist a week ago that she has cancer and at most two months to live. She had told her daughter who lives in Phoenix the news and was on the flight to go celebrate two of her granddaughters’ graduations and then to tell her faith-hardened daughter and the family her situation.  Her granddaughters were to be waiting at the airport to pick her up when we arrived and would drive her to their home. She asked me to please pray that her daughter takes the news well and would turn back to Jesus. I agreed that I would. Gloria also asked about me and my family during our time together so I shared what Jesus was up to in my life, with my family, and in my church. We had a very nice talk for the remainder of the flight and encouraged one another.

As we disembarked from the plane, a Southwest employee met her on the exit ramp and wheeled her down to baggage claim. Having reached the area first, I saw from across the carousel Gloria arrive with her two granddaughters. I thought about how these two young ladies had no idea what their grandma was going through and would soon tell them. I felt moved to go talk to them so making my way around the bags, Gloria introduced me to “her girls”. With laughter, she made sure to emphasize that my youngest son was unmarried. I shook both of their hands, looked them each directly in the eye, and shared how amazing and special their grandma is. Then turning to my new friend, Gloria, I reached out to hold both of her hands, knelt down before her wheelchair, and told her face-to-face, “I will see you again. Yes, I will see you again!” After winking at her one last time and nodding at her two daughters, I walked away.

Upon reaching the opposite side of the carousel where my bags would be delivered, I stole some glances their way and saw them laughing together and smiling at each other. I remember thinking to myself, “That’s how I want it to be when it’s my time - in a peaceful place with those I love and comforted to know there will be a Grand Reunion in the future.”

I ask you all to join me praying for Gloria’s daughter, Laura, that she will come back to a saving faith in the Lord and Savior and will also be able to say to her mom, “I will see you again!”

Who’s sitting next to you? Will you see them again?