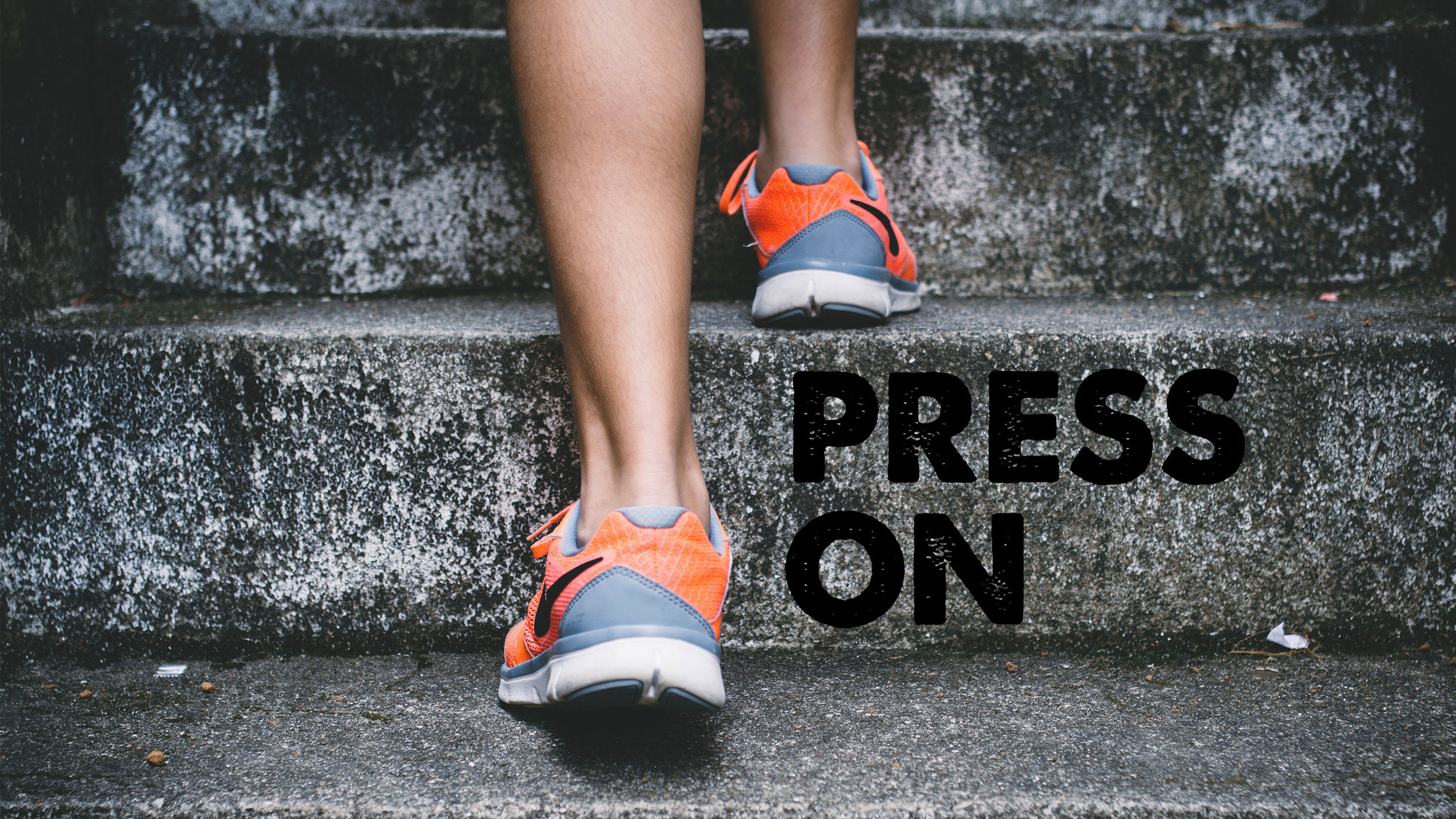 Student, struggling to get your grades up? Press on.
Parent, tired of the daily grind of building up your children in the ways of God? Press on.
Friends, tough lifting up those who are mourning? Press on.
Spouse, difficult for you to win less and lose more in marriage? Press on.

Christian, press on! Keep running the race. You are almost there, believe me and Paul and God, who tell you this tweetable proverb: Life is short between the cradle and the casket. Jesus is with you the whole rest of the race. Press on.

Last October, a prolific theological writer, Eugene Peterson, died. He was known as the one who authored the Message translation of the Bible. At the front of the sanctuary during his funeral, he had requested two handmade containers: one a cradle, and the other a casket. His son Eric, a fellow pastor, constructed the casket for his father. Eugene Peterson had built the cradle to hold Eric’s children when they were little. Two images - the cradle and the casket. These are the bookend containers of our lives for all of us too - from cradle to casket. Even Jesus had a cradle and a casket. Placed in a manger at birth. He was placed in a tomb after death. So will we…

But the good news is that between the cradle and the casket, through all of life's up and downs...Jesus is with you the whole rest of the race. Press on.

The Apostle Paul says it this way in Philippians 3:12-14:

Not that I have already obtained all this, or have already arrived at my goal, but I press on to take hold of that for which Christ Jesus took hold of me. Brothers and sisters, I do not consider myself yet to have taken hold of it. But one thing I do: Forgetting what is behind and straining toward what is ahead, I press on toward the goal to win the prize for which God has called me heavenward in Christ Jesus.

Say to yourself in your spirit, “I press on!” Tell the world, “I press on!” They might ask, after what you went through or what you have been dealt, “How can you?” You can say, “I press on because Jesus has won the victory for me. I am saved. I have eternal life now and forever. Death is defeated. The rest of my life is going to be about being a witness of His life transformation!”

I weep with joy over hearing about Jennifer Luckhardt’s story of grit, passion, and pressing on.

Rachel Bredow was captivated by Jenn Luckhardt’s story so much that she wrote up an article entitled, “Teachers Who TRI” hoping to get it published wide and far. Take a look at this beautiful story of life transformation:

When Jenn Luckhardt crossed the finished line at the Mom’s Tri in Goodyear, Arizona on May 4, she was not just finishing a sprint triathlon, she was taking another step in a health journey that actually began two years prior.

Jenn is a 1st grade teacher at Christ’s Greenfield Lutheran School in Gilbert, AZ, where she has been teaching for six years. Two years ago, Jenn was working through a women’s Bible study on discerning the voice of God when she pretty clearly heard what He had to say. “I had been praying my way through some goals and hopes for my life and my family.  Through this time, I kept getting pointed to a healthier life. God kept showing me that He had so many blessings waiting for me, but to fully enjoy these blessings He wanted me to have a healthy family, home, marriage, and a healthier me.”

And sometimes God uses another person’s voice to get us to listen. A parent of one of her students, Ann Woods, tried to get Mrs. Luckhardt to sign up for a sprint triathlon that she, herself, had done before. “Mrs. Luckhardt has been a teacher of one of my children for three consecutive years. Over those three years, we have become close.  I knew that she was trying to get into better shape.  I couldn't think of a better way to thank someone for being a wonderful teacher to my precious children, a godly woman, and friend than to encourage her to become more physically fit.  I asked her over a year and a half ago if she would consider a triathlon. She was interested, but after a while balked at the idea.”

So instead of a triathlon that year, she completed 1,000 miles of running/biking/walking over the course of 365 days. Accomplishing that challenge gave her the confidence to say yes to Ann when she asked the next year about the triathlon. “Ann brought it up again the next year when registration opened for the MomsTri, but I had been dealing with some injuries and I still wasn't confident that I could do it.  But Ann wouldn't let it go.  She found a way to get me signed up that I couldn't say no to.”

Jenn’s Christmas present from her students and families this year was the registration fee and training kit for the Mom’s Tri in the spring. But her students’ families didn’t stop there.  In an effort to show support and encouragement on her goal to a healthier life, nine other moms in the school signed up as well.  There was no backing out now. “I had no choice basically”, Jenn says about training and completing the triathlon, “but in the most positive and encouraging way.  I don't know that I ever would have believed in myself enough to do this without the persistence of Ann and encouragement of the parents in my class this year.” 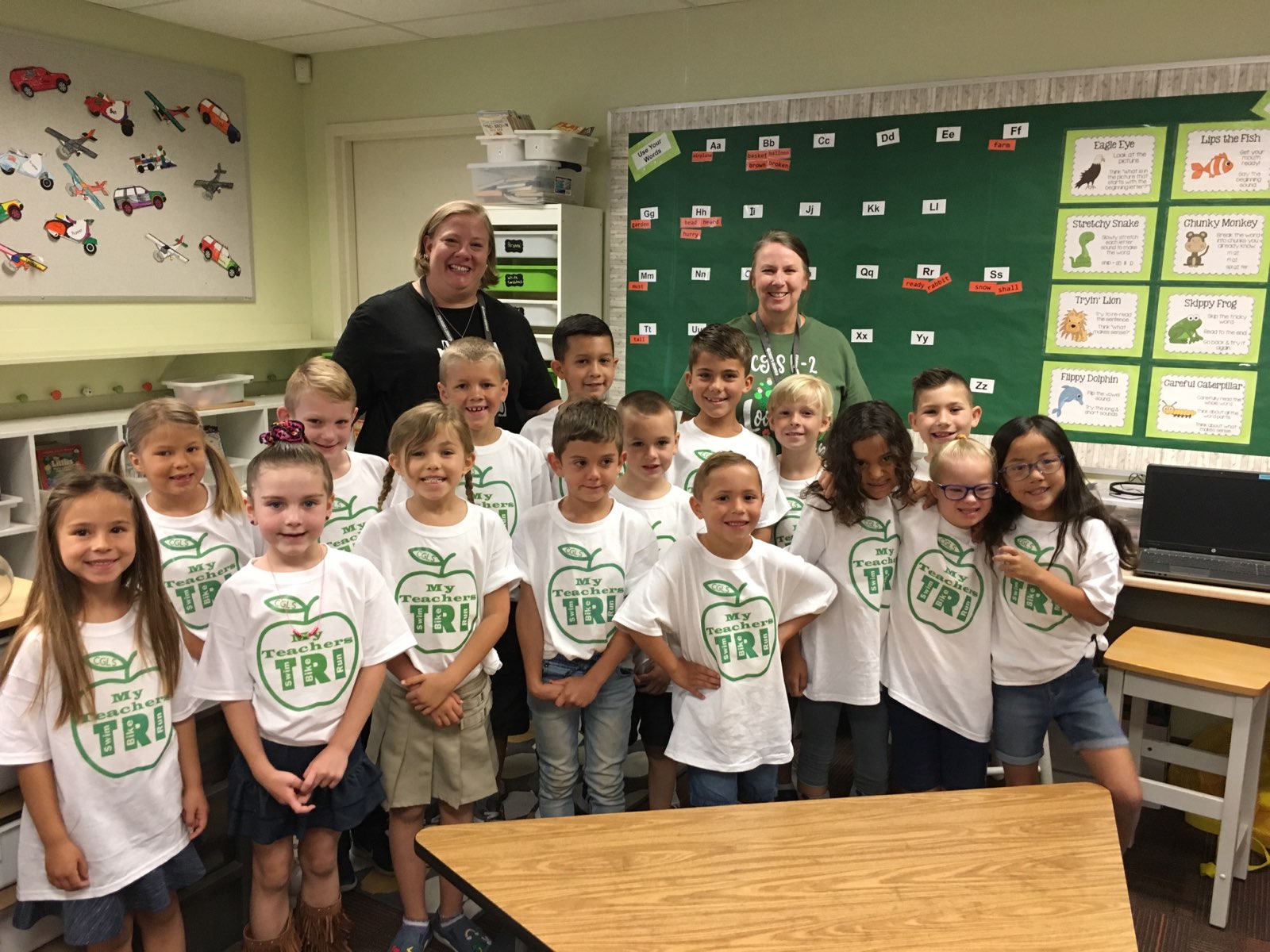 The road wasn’t easy along the way. Injuries and doubt, at times, clouded the path. “I’ve had a stress fracture in my left foot and a strained ACL in the past.  So I had to be careful to not over-train and to listen to my body, making sure to push myself without re-injury.  The biggest struggle that I battled almost every training day was that little voice in my head that whispered, ‘You can't do this.’  Fear is a huge struggle.”  But the community of support around her, the students in her class and her family kept her focused. “I would think of a student or my daughter and how they work through tougher struggles than riding this bike or swimming these laps or walking these miles.  They keep going, I keep going.”

The joys of the journey were simple and yet impactful.  “I don't know why it surprises me, but our God is so good.  He takes a simple goal like completing a sprint triathlon and turns it into something so much more.  I was a little overwhelmed and nervous by this whole thing.  It wasn't supposed to be this big of a deal, but God's plans are always bigger and better than we can imagine.  I never thought that setting this goal with one friend would turn into ten registered participants.  I was hoping that I'd change bad habits in my own life, but this experience has also created healthy habits for my daughter.  She would cry when I told her it's not a gym day. I've also been surprised at just what this body that God created can do.  It is really pretty amazing.” 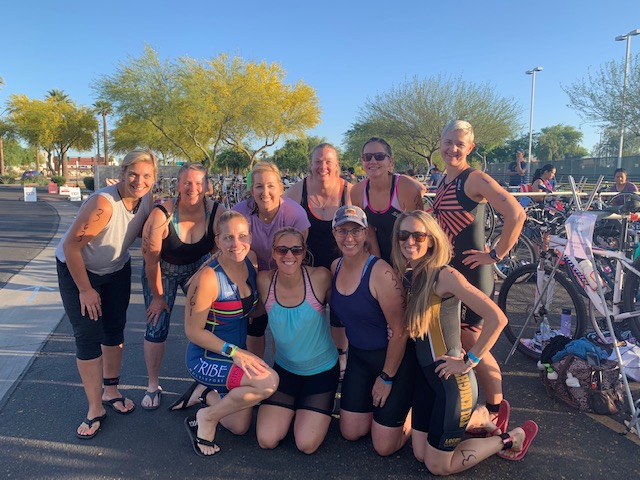 Of the ten women who competed from Christ’s Greenfield, six of them had never done a triathlon before.  Despite some initial pre-race jitters, the day of the race was an amazing celebration of what a community can do when they are united toward a common goal. There was not a dry eye in the crowd as Mrs.Luckhardt crossed the finish line followed by the other moms and their kids. After the race, Jenn expressed her thanks to the other women, her family and all those who supported her.  “I don’t think I stopped crying really. Thank you for today and all the days before today. Two years of telling myself no, being afraid to even get started, and not believing I could do this. I am so much more blessed by your believing I could and not letting me talk my way out of this.”

When people support one another in healthy, life-giving efforts, God is present and the Holy Spirit moves. 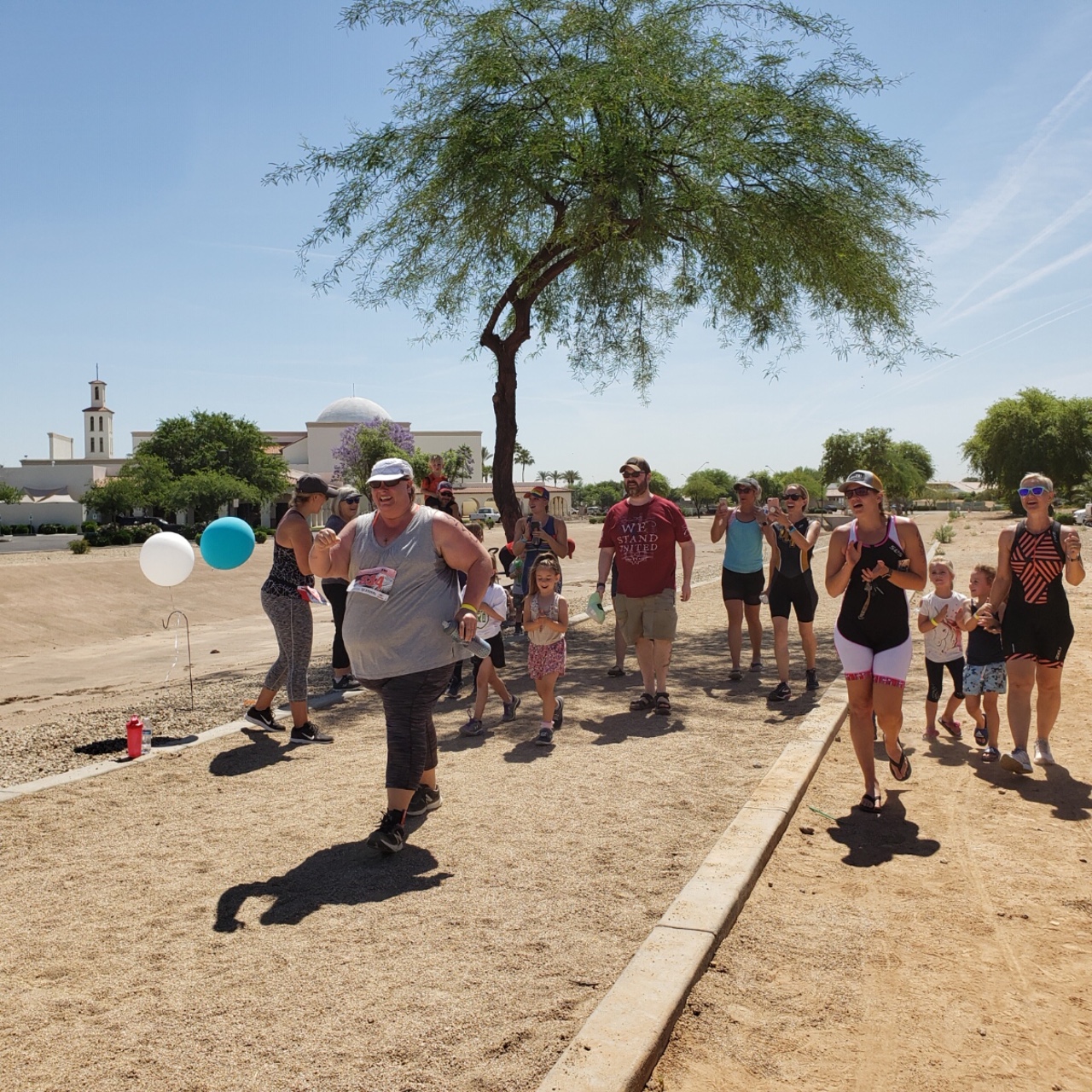 Check out the support from the body of Christ encouraging Jennifer to press on towards her goal to finish the race...may we all do the same in this life for others!