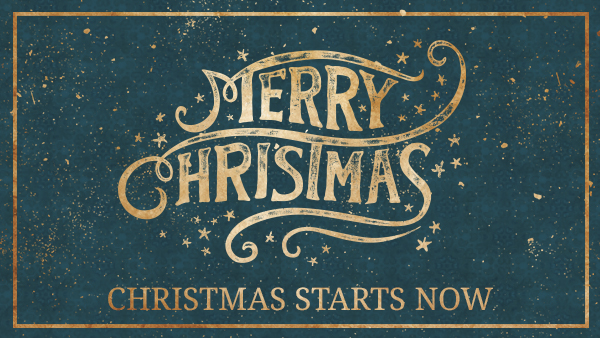 Merry Christmas from your family at Christ’s Greenfield Lutheran Church and School. We pray that you had a wonderful experience with us over this Holiday Season! God is good...all the time!

Christmas day is here, and for some of us, we will join the world, and say goodbye to Christmas tomorrow as we move towards wishes of a happy new year.

You might say, “What? No, Pastor Jake, Christmas is over tomorrow! It’s been going on for months!”

True, for some. The businesses have been booming with Christmas products for the whole last quarter of the financial year. I remember shopping for my kids’ Halloween outfits in early October at Walmart, and a few aisles down, the shelves were packed already with ornaments, tinsel, and reindeer blow up yard decorations.

I say, “Christmas isn’t over...Christmas starts now.” But, don’t believe me, believe the church traditions of the middle ages. The church some 1,000 years ago began to celebrate more officially the seasons of the church.

Advent (“coming”) is our time in December to prepare and look for the coming King of Kings.

Christmas starts now and is a 12-day church season culminating on Sunday, January 6. On that Epiphany (“appearance”) Sunday, we celebrate the appearance of the “Magi” from the east that come to a house in Bethlehem sometime after Jesus was born to worship Jesus.

Christmas starts now with twelve days of celebration, joy, and remembrance that baby Jesus has come as King of Kings and Lord of Lords.

By now, you might be humming a very long but favorite song that speaks of the 12 days...

The “12 Days of Christmas Song” has been said to have been written in the 1600’s in England by a Catholic who was being persecuted for their faith while trying to teach/catechize their children secretly using a song.

The “true love” stood for God Himself and the “me” was every baptized believer.

On the first day of Christmas, the true love gave to the baptized believer, “a partridge in a pear tree” standing for none other than Jesus Christ, the Son of God.

What’s a partridge? I honestly never knew until I googled it one day... Ok, today... It’s a bird.

The song metaphorically has Christ symbolized as the mother partridge which feigns injury to decoy predators from her helpless nestlings, much in memory of the expression of Christ’s sadness over the fate of Jerusalem: “Jerusalem! Jerusalem! How often would I have sheltered thee under my wings, as a hen does her chicks, but thou wouldst not have it so…” (Matthew 23:37)

The other symbols meant the following:

Is this really true? I honestly doubt that the original author had this in mind but he might have. However, it’s a cool way to look at how this song sung before Christmas in our culture connects to the church celebration of twelve days of Christmastide.

The point being...when everyone else in our world puts Christmas away, we get to keep on celebrating for 12 more days. And better yet, celebrating all year long.

So this Christmas season, for 12 days, consider giving just one more Christmas gift. It will surprise people. Maybe you are bound to throw a New Year’s party but thrown in a “Merry Christmas” greeting in that night as well. You might keep your Christmas tree or lights up until Epiphany Day. Take the Magi out of your manger scene and make a big deal about them coming on January 6. Sit as a family and read the rest of the Christmas story in Matthew 2!

Why do such a crazy thing over the next 12 days and not just pack everything up tomorrow?

It’s now time to join John the Baptist saying, "Look, the Lamb of God, who takes away the sin of the world!”

The Lamb of God has come. He has died. He has risen. And He will come again to bring us all to be with Him.