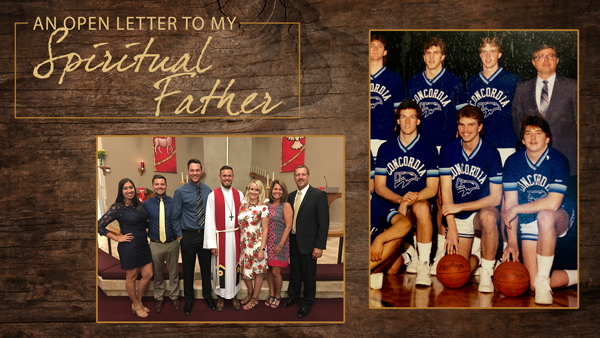 Through all sorts of social media platforms including texts, Twitter, Facebook, Instagram, LinkedIn, Snapchat, and literally hundreds of others we strive to stay connected with each other in today’s world. Social media can be used as a tool to help us communicate with those both near and far from us. However, there is something to be said about the old-fashioned hand-written letter. Several years ago CGLCS had about 40 men attend a series of sessions titled, “Letters from Dad”. In it we learned how powerful the hand-written word is on a physical sheet of paper. Letters provide the person receiving it with something to keep, demonstrate that the writer carved out time to sit down and write what was on his/her heart, require intentionality, show a higher level of importance to the receiver, and provide encouragement. Scripture tells us to“encourage one another and build each other up” and writing a letter to someone is a powerful way of doing just that.

Recently, I learned that my college basketball coach back from my days at Concordia University Wisconsin is most likely in his very last days here on earth. A former teammate of mine asked us all to reach out to him to share how he impacted our lives. I share that letter with you now as a way of demonstrating the power of letting those that mean so much to us know the impact they have had on our lives. In honor of Father’s Day, I urge you to pull out a sheet of paper right now and write a letter to your spiritual “father” – whomever that may be. It does not have to be long to be impactful nor does it have to sound “pretty”. Just say what you want to say in your very own words. Be genuine and do it now before it is too late!

Coach Rasmussen,
I heard from Andy that you were not feeling well so I wanted to be sure to share with you what a profound impact you have had on my life. When I heard the news today I told Janell that I consider you my “spiritual father”. I loved my dad deeply and could not have asked for a better man than him to raise me. He was the one that insisted that I not stay close to home for college but to go away to learn how to be my own man. He also was insistent of my attending a Christ-centered college. He didn’t speak much of his faith, that I can recall, while I was growing up through high school. I knew he was a believer but his faith wasn’t the highest priority (his wife, family, and golf were) and he didn’t verbalize it. Consequently, my spiritual state during the years growing up at home was that I went to church on Sundays but the other six days of the week were mine to use and do with as I pleased.

Throughout my freshman year at Concordia, I struggled with homesickness and a very poor experience with the players on the basketball team. So much so that I wanted to quit the team at the semester break but my father insisted that I not do that. I am so glad that he encouraged me to stay with it because after that season the CUW president was wise to hire you as our new coach. Little did I know that meeting you would change my life and still impact it to this day. Early on after we met, you saw something in me that I didn’t see in myself. You honestly and accurately assessed my basketball skills largely as the 6th man on the squad but not a part of the starting five. Despite not being a starter, you saw leadership qualities in me and made me, a bench player, the team captain. You challenged me to lead the team in pre-game prayers and to become the FCA president. You encouraged me to reach out to all CUW athletes about their need for Jesus. By calling me out and raising me up, you were used by the Spirit to fan my faith into flame and to make Jesus real to me. My faith was no longer a “one day a week” experience but a “24/7” relationship with the Son of God. Through our growing relationship, I saw in you for the first time in my life, a man who was a sincere Jesus follower seven days a week and one to try to emulate. Over the many years since being under your mentorship, I have reflected often about how you challenged me to be what God created me to be and to be genuine by living out my faith all the time, everywhere, and with all people.

For the past 15 years, I have been the volunteer men’s ministry leader at our church in AZ. Our numbers have grown from initially just a few guys hanging out together to a formal ministry we now call the IronMen and over 180 strong. We have a weekly Sunday Bible study, a monthly Bible study called PUB - Personal Understanding of the Bible, an annual retreat, and a sub-group of guys called the Holy Smokers who smoke and serve meat for church and school events. The IronMen also host the annual Date Night Challenge that 50 – 60 married couples attend to commit to dating their wives once a month for 12 months.

I share these things because I want you to see that by Jesus putting you in my life over thirty years ago that the trajectory of my life changed dramatically in ways that I could never have imagined. Now when I minister to men, I try to find in them ways that they can become leaders by using their gifts to serve others. I have a passion to come alongside men to coach and support them as you did me.

Finally, I have three sons that are now grown. I am thankful that because of your influence I was able to tweak my own father’s methods of raising me to include a deep spiritual component that has seen obvious fruit. My oldest son, Caleb, is an LCMS pastor in Fort Collins, CO. My middle son, Jordan, is a Thrivent Financial for Lutherans representative and my youngest son, Seth, is a sophomore at CUW majoring in Occupational Therapy. Each of these three young men have a very active faith in Jesus and live it out with actions of love for others.

Thank you, Coach, for the time, energy, knowledge, and faith that you freely poured into me! I am eternally grateful for all you have done. May the Lord bless you and keep you; may the Lord make His face shine on you and be gracious to you; and may the Lord turn His face toward you and give you peace!

Since the writing of this letter, Coach Rasmussen went to be with the Lord on Sunday, June 3, 2018.